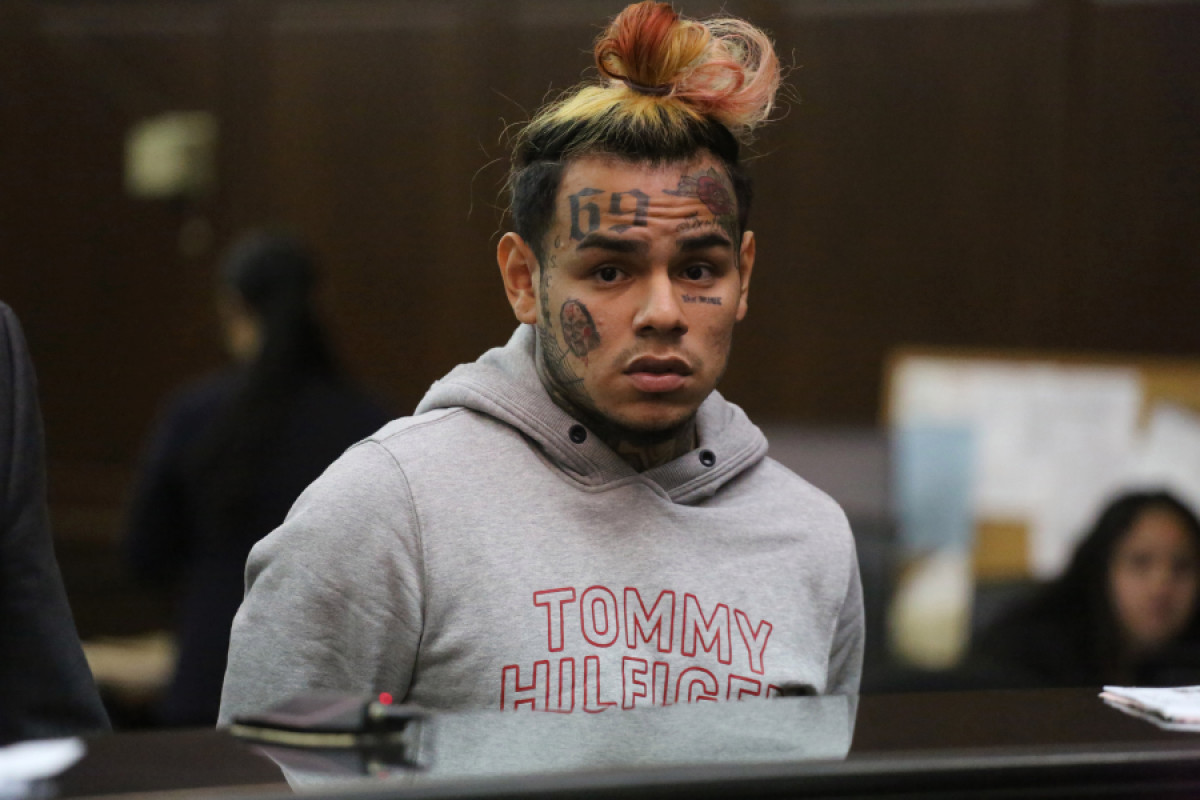 The rapper and Instagram star known as Tekashi 6ix9ine has had multiple run-ins with law enforcement and is no stranger to courtrooms. But on Tuesday, wearing a navy blue prison jumpsuit in federal court in Manhattan, he took on a new role: as a government witness, testifying against his former crew, the Nine Trey Gangsta Bloods.

On trial are two former confidantes, including Anthony Ellison, who prosecutors say is a member of the Nine Trey gang. Mr. Ellison is accused of kidnapping 6ix9ine last year as part of an internal power struggle over his lucrative career.

Tuesday’s testimony was a remarkable plot twist for 6ix9ine — born Daniel Hernandez — who had spent the entirety of his short career cultivating a brand as an unrepentant public nuisance.

But in November, he abruptly switched course. Twenty-four hours after being arrested and charged as part of a sweeping racketeering case against the Nine Trey gang, he cut a deal with federal prosecutors to flip on his crew.

Mr. Hernandez, who is from Brooklyn, rocketed to viral fame for his over-the-top persona, including rainbow-dyed hair, face tattoos and clothing emblazoned with obscenities.

On Nov. 18, prosecutors unsealed racketeering and firearms charges against Mr. Hernandez, 23, and several other alleged members of the Nine Trey gang, including Mr. Ellison and Kifano Jordan, an alleged high-ranking member who had served as Mr. Hernandez’s manager.

The next day, Mr. Hernandez cut a deal with prosecutors, he said in court on Tuesday.

Mr. Hernandez pleaded guilty in February to charges stemming from the racketeering case, and admitted then in court to being a member of the gang from 2017 to 2018.

He spoke more in detail about his involvement in the gang on Tuesday.

“We participated in a lot of crimes,” he testified. “Robberies, assaults, drugs.”

In a clear voice, Mr. Hernandez laid out for prosecutors the internal workings of the Nine Trey gang, one of the country’s most robust prison crews, which was founded more than 25 years ago on Rikers Island.

His testimony was stunning at times in its directness. Prompted by prosecutors, Mr. Hernandez eagerly translated gang codes for the jury, and listed by name the hierarchy of his former Bloods set.

At the time of his guilty plea, prosecutors said they intended to lobby for Mr. Hernandez to receive a lesser sentence if his cooperation proved successful.

Mr. Hernandez’s turn on the witness stand was not entirely unforeseen: Days before his arrest last November, he had a public falling out with the Nine Trey gang, precipitated by his kidnapping last summer for which Mr. Ellison is now charged.

At the time of the kidnapping, Mr. Hernandez’s professional prospects were rife with conflict. While feuding with the Nine Trey gang over control of his career, Mr. Hernandez’s manager was also encouraging him to cut ties with the gang altogether.

Mr. Hernandez renounced the gang in November, but the parting came too late; days later, he was arrested by federal authorities.

The case has offered a rare glimpse into the rapidly changing business of rap, where Mr. Hernandez’s bizarre character arc has emerged as the genre’s latest cautionary tale. In the internet age, a viral persona like Mr. Hernandez — with his massive following and baked-in fan base — was an attractive cash cow for a gang like Nine Trey, which offered him the street cred he did not otherwise have.

Mr. Hernandez has suggested as much in court, saying that his brash stunts and gang homages were all part of an act meant to foster his public image.

“That’s what people liked,” he said on Tuesday. “It was just a formula, a blueprint that I found that worked.”

A first-generation American from Brooklyn, Mr. Hernandez was a teenager when he began inventing a sensational alter ego: Tekashi 6ix9ine.

He became a near-overnight internet sensation, gaining popularity for streaming bizarre, offensive stunts and starting feuds with other rappers and internet personalities on platforms like Instagram.

Mr. Hernandez then pivoted to rap. Not long after his first tour, he partnered with Mr. Jordan.

But the young rapper was almost immediately out of his depth, his lawyer has said.

After he connected with the Nine Trey gang, Mr. Hernandez began uttering Mr. Jordan’s call sign, “Treyway,” in music videos, and streaming videos of the gang’s antics, including one incident in which the crew brags about a shooting.

Mr. Jordan, known as “Shotti,” pleaded guilty to two firearms charges earlier this year, and was sentenced to 15 years in prison.

Whether Mr. Hernandez can salvage any of the bizarre character he built remains unclear. Prosecutors have indicated in the past that he may need to be moved into the witness protection program.

On Tuesday, Mr. Hernandez’s trademark face tattoos were visible, but his signature rainbow hair had long grown out, replaced with his natural black.