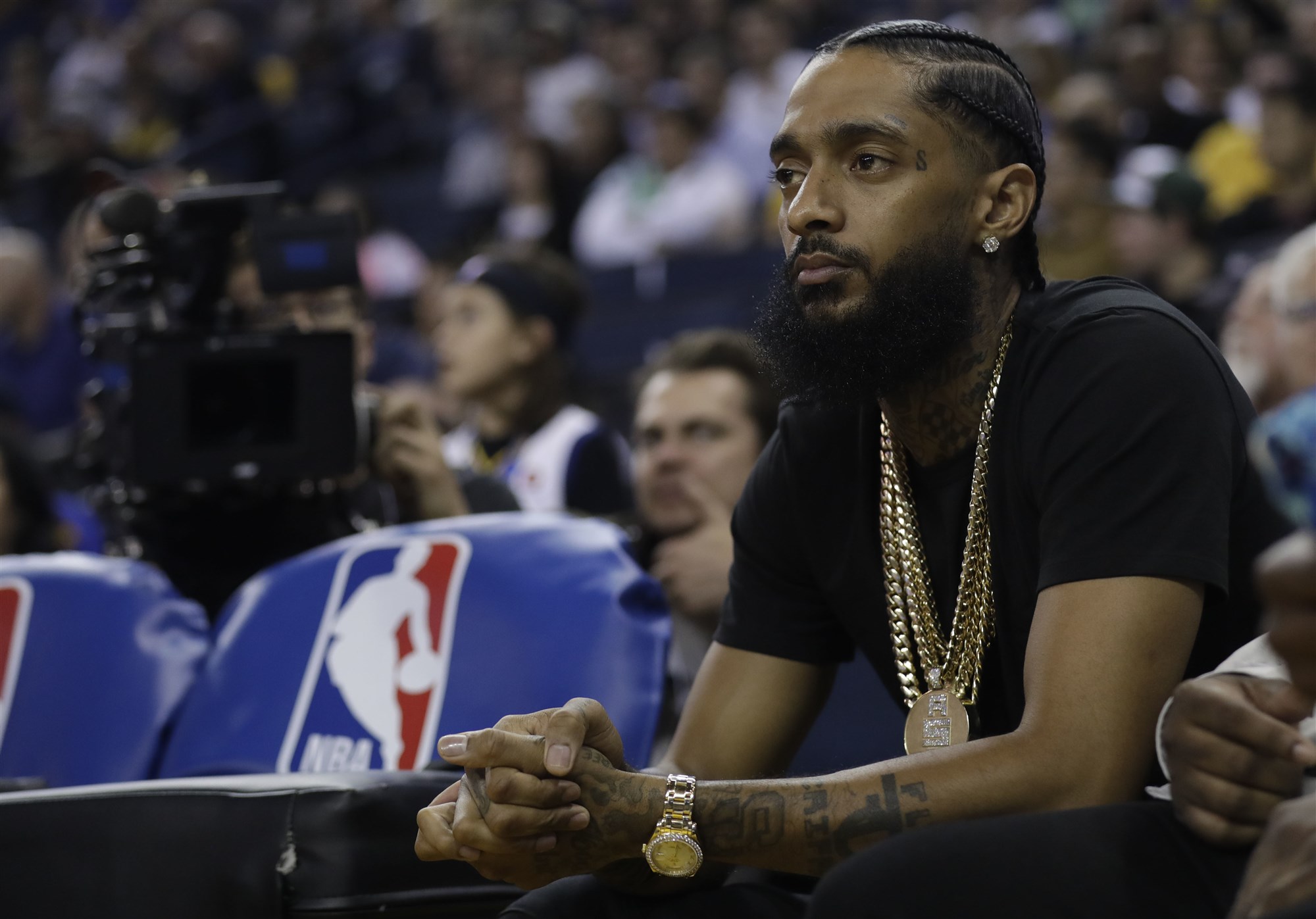 LOS ANGELES — The Grammy-nominated rapper Nipsey Hussle was killed in a shooting outside his clothing store in Los Angeles on Sunday afternoon, law enforcement sources said. Two other men were shot, and a suspect remained at large.

Police sources said Hussle was shot multiple times in the parking lot at Marathon Clothing on West Slauson Avenue in South Los Angeles at about 3:25 p.m. and that he was pronounced dead at a hospital. One of the other men was being treated at a hospital, and the third man declined treatment, Los Angeles police Lt. Chris Martinez said.

No other information was immediately available, but just a couple of hours before, Hussle, 33, whose real name was Ermias Ashgedom, had tweeted, “Having strong enemies is a blessing.”

A large crowd of people, many of them crying, gathered at the intersection as police and media helicopters whirred overhead.

One of them was Matthew Talley of Denver, the engineer and director known as Megatron.

“It ain’t just Los Angeles. He was an inspiration that was bigger than Los Angeles,” Talley said. “You see all these people out here? …

“He was really cool,” Talley said. “He was a dope individual every time I met him.”

Hussle had long been associated with the Rollin 60s Neighborhood Crips, one of Los Angeles’ largest street gangs, which he publicly acknowledged in a 2010 interview with Complex magazine.

In more recent years, however, Hussle had developed an interest in technology and community development, and he was part of a team of artists and entrepreneurs who developed Destination Crenshaw, an open-air museum devoted to honoring African-American artistic achievement.

“I think that with me being influential as an artist and young and coming from the inner city, it makes sense for me to be one of the people that’s waving that flag,” he said.

Hussle was also an investor in Vector 90, a co-working space in South Central Los Angeles, where young people can take classes in science, technology and mathematics. He called the center a “bridge between Silicon Valley and the inner city,” saying at last year’s Afrotech conference that he hoped to expand to other cities, like Atlanta, Washington and Baltimore.

In an interview last year with Forbes, Hussle said that as a youth, he’d fallen prey to the “ignorance and self-destructiveness in the narrative that was pushed on us through music in our generation.”

“I see how damaging that was, for myself included, and we’re all subject to the social pressure,” he said. “I wasn’t above it. Each of us are impacted by what’s going on around us. For me, understanding the platform I have and who it speaks to, it’s about being strategic. …

“I wanted to redefine the lifestyle and what we view as important,” he said. “When you hear ‘buy back the block’ as the narrative, that’s powerful. That’s a step towards redefining the expectation.”

Hussle and two co-owners opened Marathon Clothing in June 2017 as a “smartstore,” complete with a smartphone app on which fans could buy exclusive content and products.

“I wanted to open up a brick and mortar physical retail in this area and thought, ‘What’s the trajectory and likelihood of being successful as e-commerce grows?’” he said in an interview with Billboard at the time.

Hussle said his goal was to “create a theme park for the brand.”

Hussle’s death deeply shook the worlds of music and sports, in which he was seen as an inspirational figure.