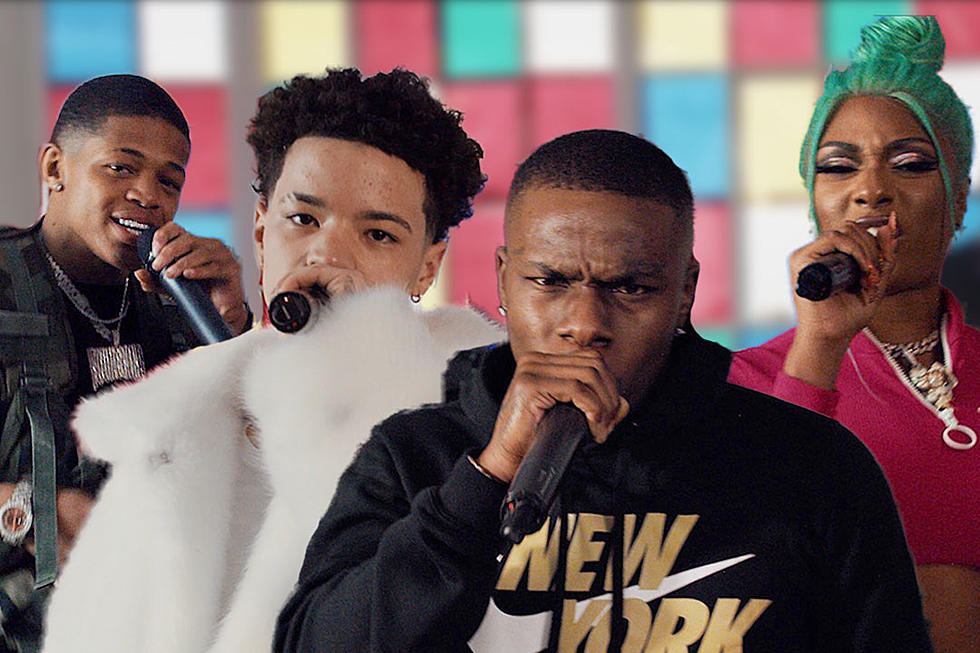 After the cover of the 2019 XXL Freshmen has been revealed and interviews done , it’s time to deliver the cyphers. The most exciting part of the Freshman process for many, the cyphers give the new 2019 XXL Freshmen a chance to prove their mettle on the lyrical side. This year, XXL kicked things off with the diverse foursome of DaBaby, Megan Thee Stallion, YK Osiris and Lil Mosey.

Following in the footsteps of past XXL Freshman cypher DJs such as DJ Drama and Sonny Digital, DJ Scheme is on the ones and twos for the 2019 iteration. The South Florida artist, who got his start in the game working with previous XXL Freshmen XXXTentacion, Ski Mask The Slump God and Wifisfuneral, sets the pace by queuing up a D-Fresh-produced, synth-driven track with climbing chords for the members of the new XXL Freshman class to do their thing.

First up to bat is Lil Mosey. The instrumental isn’t his cup of tea, but the Seattle rapper improvises. Rocking a white fur coat and chilly watch, he delivers some cold lines.

“OK, this a lame as beat/Walk up on your bitch, my dick eight-feet deep,” Lil Mosey raps with a monotone deliver. “Why he talkin’ out his lip, he know ain’t shit sweet/Ay, ay, yo’ block I’m gon’ sweep.”

Next, Megan Thee Stallion is out to prove the summer is hers. “Real hot girl shit,” she prefaces her cypher contribution before going zero to 100.

“I’m gettin’ money, I ain’t even mad atcha/Rich bitch shit, I might throw a bag at ya,” she impressively raps in a double-time flow. “Speakin’ on my name only make it sound better/Your nigga in my DMs and he writin’ love letters/Texas booty lookin’ softer than Hawaiian rolls/I be in the gym, I’m your girl body goals./Flexin’ on the ‘Gram do it for you mad hoes/Everything I do, they watch me like I’m on parole.”

Then YK Osiris applies a change of direction. The Jacksonville, Fla. native, known for his melodic musings, croons through his braggadocio bars. “She say she ’bout it when she lookin’ at a young nigga/I fuck her good now she talk ’bout a young nigga,” he belts. “And I don’t understand these bitches, why they like me/I put it in, now she wanna act so feisty/Now she say she worth it, but she ain’t worth it/I put them diamonds on my wrist and now she want me.”

To close things out, DaBaby comes extra prepared. The North Carolina representative show and proves with a full two-minute freestyle where he holds no punches.

“Everybody know my name ringin’ bells, ringin’ bells like the hallway/I ain’t gotta cap, ain’t no mufuckin’ rapper, I’ll whip out and air it out broad day,” he snaps, at one point causing YK to excitedly mimic DaBaby’s “Suge” dance. “I got in with the stick and I’m with that/Break a nigga in half like a Kit Kat/I been tryna be positive, mama/They ain’t fuckin’ with Jonathan, mama.”