Ghana’s Only Openly Transgender Musician, ‘This Place Is Dangerous’
Advertisement 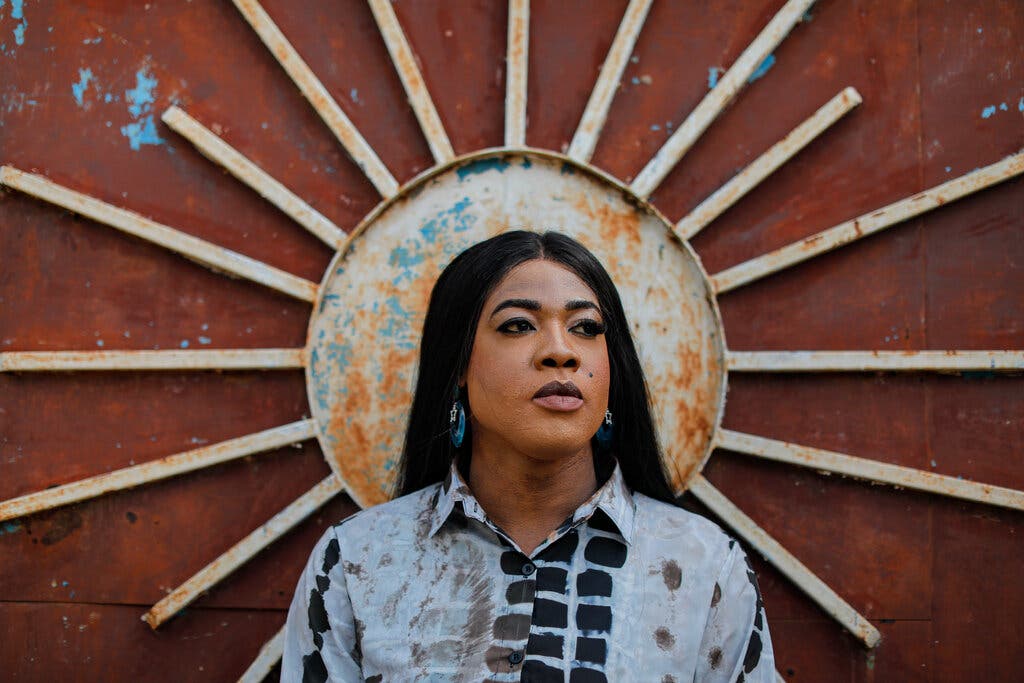 ACCRA, Ghana — When Maxine Angel Opoku was still an upstart musician, relatively unknown and struggling to stand out in Ghana’s competitive music scene, she sang about love, romance and being sexy.

Then, in August 2021, lawmakers in the country’s Parliament introduced a bill that would imprison people who identify as transgender, as Ms. Opoku does, and her art urgently turned to advocacy. Her music began to attract both legions of new fans as well as powerful adversaries.

“Dear Mr. Politician, fix the country right now. The people who voted for you, are disappointed in you,” Ms. Opoku sings in one of her latest songs. “Kill it, kill it, kill the bill.”

The subject of the song is the “Promotion of Proper Human Sexual Rights and Ghanaian Family Values Bill,” which, if passed, would make identifying as gay, transgender or queer a crime punishable with a maximum prison sentence of five years.

As Ghana’s only openly transgender musician, Ms. Opoku, who is known on stage as Angel Maxine, is one of the most visible targets of the proposed legislation in a country where the gay and transgender community is largely closeted.

“Music is the tool for my advocacy,” Ms. Opoku said in an interview in Accra, the capital of Ghana. “This is the only way my voice can reach the politicians, the president, the homophobes, the layperson.”

Same-sex sexual acts are already criminalized in Ghana, in part because of a British colonial-era law, but it is currently not a crime to publicly identify as gay, transgender or queer.

In response to the proposed legislation, Ms. Opoku released a song called “Kill the Bill” and, shortly before that, another song, “Wo Fie,” which means “in your home,” in the Akan language, one of the most widely spoken in Ghana.

Advertisement
“Wo Fie” talks about how L.G.B.T.Q. people may be part of every family, and calls for tolerance and respect. In the lyrics, Ms. Opoku sings about being unapologetically herself.

Ms. Opoku, the oldest of five children, was born in Accra on Sept. 3, 1985, to a fashion designer mother and a civil servant father.

“She loved wearing girls’ dresses, playing with the girls,” her mother added. “She was a girl trapped in a male body.”

Still, it took Ms. Forson many years to accept her daughter’s identity. Ms. Opoku recalled that mother and child would frequent churches to hear pastors, including the controversial Nigerian preacher T.B. Joshua, seeking to “cast the gay out.”

“One day I was praying, and I heard God say, ‘I created her in my own image and I love her,’” Ms. Forson said.

Ms. Opoku started out singing at home during morning devotional prayers with her family, and as a teenager shadowed members of a now defunct girl group. She began performing music as a woman in 2008 while studying hospitality management in Koforidua, a city north of Accra. It was a dangerous endeavor. Once, during a set, a bottle was thrown from the audience, striking her in the head, she said.

Advertisement
With no label to back her or to sponsor recording sessions, she put her music — whose sound is a fusion of Afropop, dance hall and the increasingly popular Afrobeats — on hold and instead moved between jobs in the hospitality sector as a cook and waitress, where she faced issues such as misgendering.

Even before the threat of prison in the impending legislation, to be openly gay or transgender in Ghana was extraordinarily risky, with those identifying — or perceived to be — as such facing acts of violence from both strangers and their own families. Employment and housing discrimination is common.

“Some get forced into marriages, get thrown out of their homes; some of them drop out of school because they no more have support,” said Leila Yahya, executive director of One Love Sisters, Ghana, an advocacy organization for L.G.B.T.Q. Muslims, and a friend of Ms. Opoku.

Ms. Opoku returned to music in 2018, and while defiance has won her followers online at home and abroad, it has also marked her out. Her home was ransacked and looted by a mob last year, forcing her to scale back on public appearances. Ms. Opoku was not at home when the mob attacked.

“They could have taken me to the police station, maybe I could have even died,” said Ms. Opoku, who now performs rarely, and only in private. “I could have been lynched.”

After Ms. Opoku’s home was attacked, the maverick musician Wanlov the Kubolor and his sister, known as Sister Deborah, helped her find a safe space and began a professional and personal relationship. The siblings, long viewed as social contrarians in Ghana’s music industry, are featured on both “Kill the Bill” and “Wo Fie.”

“It blew me away, the stuff she was living with from day to day: financially, psychologically, physically,” said Wanlov the Kubolor. “I don’t think I could have survived that life.”

Ms. Opoku said she also wants to be known for music unrelated to her activism. But that has been an unrealized ambition, so far. A completed mini-album of non-advocacy songs remains unreleased because of a lack of sponsorship, she said.

Advertisement
For Wanlov the Kubolor, the recent rise in Ms. Opoku’s public stature has been equal parts joyful and painful.

Recently, the song “Wo Fie” went viral on TikTok outside Ghana, and he believes Ms. Opoku’s increasing international visibility — although fraught with safety risks — could also serve as a protective factor for her.

But Ms. Opoku isn’t so sure. “Every day is dangerous for me,” she said. “I cannot walk on the street as a normal person.”

Advertisement
Taking a bus is out of the question, she said, as is going to the market. “I cannot do a lot of things,” she said.

Her daughter’s safety is front of mind for Ms. Forson, too. “I fear for my daughter a lot,” she said. “She is a vociferous person and so she is a target, and I always pray that God should protect her.”

If passed, the bill would criminalize positive portrayals of queer life in the media, codify the widely discredited pseudoscience of conversion therapy and compel the families and neighbors of L.G.B.T.Q. people to report them to the authorities.

Those who are arrested can avoid prison by undergoing psychiatric and endocrinological treatment “to overcome their vulnerabilities.” The bill also states that allies who give any form of assistance to L.G.B.T.Q. people, such as housing, could be sentenced to between five and 10 years in prison.

The proposed legislation is backed by the country’s powerful religious leaders, politicians from the two leading parties and large sections of the local media. It also has broad popular support in a country where a 2019 survey found that 93 percent of Ghanaians would dislike having a homosexual neighbor.

The bill has also galvanized outspoken opposition from a small but influential coalition of local academics, lawyers and rights activists.

Last month the Speaker of Parliament, who has previously expressed support for the legislation, said it was a priority and would be passed before the next elections in 2024.

Thanks in part to the L.G.B.T.Q. antipathy fomenting around the bill, Ms. Opoku said it was difficult to see a future for herself in Ghana. It’s nearly impossible for her to perform freely in public now; the bill would make it legally impossible.

“I don’t see a life here for me,” she said. “If I cannot come out openly, go on the streets to move about my daily life, if I cannot get a job, how do I sustain myself? This is no life.”

Despite the difficulties, she remains resolute about speaking up for Ghana’s L.G.B.T.Q. community in the face of this rising hostility.

Her next song, she said, will encourage at-risk people to sign up for the H.I.V. prevention pill PrEP.

“I feel like it is a responsibility,” Ms. Opoku said. “If I win, people like me will also win.”

Advertisement
Related Topics:GhanalawslgbtlgbtqimusicianRappertransgenderwanlov
Up Next